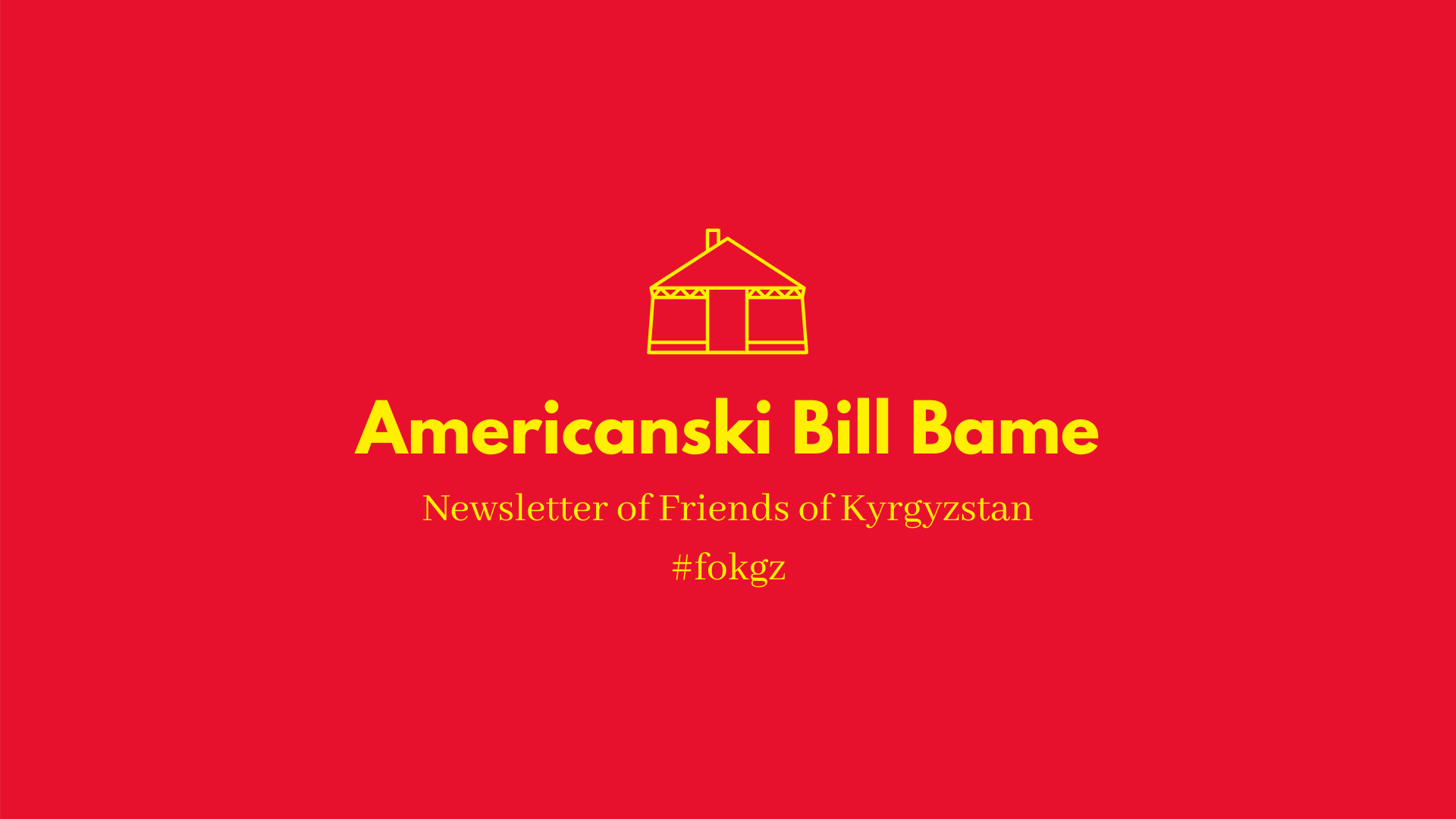 Welcome to our first newsletter!

Please contact Becca at rebkatrip@yahoo.com  with any stories, story ideas, or other information/news/photos/anything you wish to see in the monthly newsletter.

We still need a name for the newsletter, so please submit suggestions to Becca, and they will appear in the next issue, after which we can all vote for our favorite name!

We are seeking contributions to the website, such as photos for the photo gallery, recipes, and STORIES.  Stories, you ask?  Why, what kind?  After 2 years there, I’ve so many still simmering,, yet my fresh ears supply is dwindling as most everyone has heard them and I’m finally settling into a real job and so there are fewer and fewer new people in my life and rehashing it all again and again at RPCV get-togethers is starting to try my patience…But that one time was so FUNNY…And everyone should know about that one shashlik stand, oh, and the Dungan lagman at…And wow was that some much-needed cultural insight the day my kids explained about…

Yes, stories.  Stories about people.  Culture.  Anecdotes.  Getting to Kyrgyzstan, travel within Kyrgyzstan.  We want it all.  Please submit those to the website:  www.friendsof kyrgyzstan.org 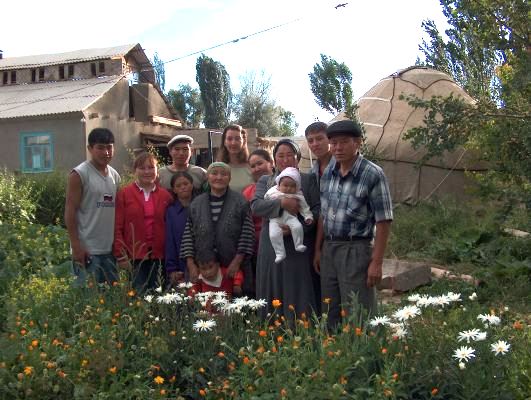 Ever Wonder What It Would Be Like to Live in Kyrgyzstan Again?

The first phrase I said in Kyrgyz after four years away was, “Menin sumkam kelgen jok.”  (My bag hasn’t come yet.)  This was not a surprise to me, since I had flown with Horizon air from Seattle to Los Angeles, and then switched to Aeroflot from LA to Moscow, and Moscow to Bishkek.  I had packed all the essentials in my carry-ons:  my camera, laptop, a change of clothes, my toothbrush and basic toiletries, a water filter, and library books on the anthropology of art.

Adjusting to being back in Kyrgyzstan was like coming home to someplace whose little quirks I knew well but needed to remind myself about.  Oh yeah, the wall switches are on the left of the door at shoulder-height.  Right, the toilet paper goes in the trash, not the toilet.  Need to remember to pick up a kepetilnik for heating bath water when I see a bazaar…

There were a lot of things that I could still say in Kyrgyz and Russian, but there was a whole lot more that people could say to me that I couldn’t understand.  I had also misplaced my mental map of Bishkek – I spent the first several days wandering around, either walking in the wrong direction for hours and then surrendering and taking a taxi home, or taking marshrutkas on crazy rides all over the place, hopping from one to the next in the hopes that I would get to somewhere I recognized.  I hadn’t planned on spending a week in Bishkek, but it was actually an unexpected blessing, since it gave me time to regroup and orient myself in a town where a mix of Russian, Kyrgyz, and English could get me by.

I was one of the Volunteers who was moved up from the south when the problems in Batken began in 1999, and my time in the Peace Corps had been a little rocky.  I had made arrangements with the Peace Corps to leave my village to head up the GLOBE ecology program in Jalal-Abad, a difficult decision made even more difficult by my host family’s failure to understand why I was leaving.  Then, during what should have been my transition, I was evacuated with the other southern Volunteers and relocated to Balikchi.  I never saw my host family again.  My time in Balikchi had been marked by professional frustration, both with GLOBE and the Fund Meerim center where I was working, and because my time was short and other PCV’s were plentiful I made few attempts to integrate into my new community.  After COS, I struggled with whether or not my second year had been served well, whether or not I had made any impact.  Hearing that the struggling GLOBE program collapsed under my successor, Alice Tyler (now  Moy), despite all her valiant efforts did not assuage my doubts.  Now I was back, and a bit leery of opening old wounds by traveling back to my old haunts. 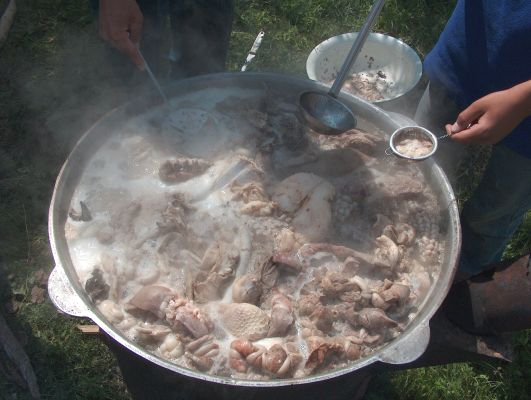 Join Friends of Kyrgyzstan and the National Peace Corps Association

Support projects in Kyrgyzstan by joining us.

Your membership in to our organization is facilitated when you join the NPCA, which you can do here: https://www.peacecorpsconnect.org/auth/signup

Four Years for a T-shirt

The judge offered his hand and apologies for the actions of misguided youth. The defense lawyer told me I taught English to her daughter and invited me to dinner with her family. The two young men accused of theft and assaulting me stood nearby, watching and listening. They must have been adding up the odds against them, measuring their bad luck. Whatever they had intended, it wasn’t this.

It happened July 4th late at night. I was walking home from West Café along Toktogul Street. The beers I drank weighed heavily and I decided to find a tree since it was another 10 minutes until home. Slipping into the shadows and doing my business, two men came toward me. I got myself proper and tried to walk past them out of the shadows and into the street. They grabbed me, saying nothing, pulling me back into the shadows. Turned around, with my back toward the street, I tried talking to them and yanking free of their grip. They kept pulling and eventually I was bent over and one had grabbed the collar and back of my shirt. We struggled in this way for a few moments until I figured if I wiggled a bit, my shirt would come off in their hands and I could escape. They yanked my shirt off and I moved out into the street.

Bare chested, fear replaced by anger, I demanded they give me the shirt and t-shirt back. I tried first in Russian, but who knows what I actually said. They looked a bit puzzled. Finally I yelled and cursed them in English. This caught their attention. The shorter and rounder of the two stopped picking up the cigarettes spilled out of my shirt pocket, got my shirt, folded it nicely and handed it back while bowing with his right hand over his heart. He then took off toward a car waiting a little ways down the street. The other one remained, t-shirt in hand and flashed a badge. He beckoned me to him. I refused to leave the relative safety of the road, where I was trying to flag down passing cars. I flashed him my Peace Corps wallet and motioned for him to come out into the lighted street. He refused and after a moment, walked to the car, taking my t-shirt.

The next morning I went to the militia headquarters with a friend to file a report. After getting passed from officer to officer, all looking somewhat puzzled and amused as the story was told, and writing the story three times, I went home thinking that was the end of it. Next morning, the militia summoned me to identify suspects. When I arrive, I’m taken into a small room where a t-shirt lies on a table. They ask if it is mine. It is. How do I know? It has the deodorant rings in the armpit. They get a good laugh when I explain, then they escort me into another room where five men are lined up against the wall. Do I recognize any of them? One of them is a militia officer who took my written report the day before. Another is an old man, still drunk from the night before and offering to shake my hand. The third a man I’d never seen before.

The last two, heads down, beltless and without shoelaces, resembled the two who grabbed me. I wasn’t sure, but it wasn’t the other three. The officer in charge didn’t need to hear anything more and pulled the two young men into the other room with the t-shirt, had them lean over the table, and took a Polaroid of them with the evidence.

They assigned me a lawyer which led to more reports. One meeting involved me and my program manager Rashid, who was now my official translator, sitting in a small room in militia headquarters, with my lawyer at a small table across from us. Next to me the two accused of attacking me waited for the questioning. During breaks they asked for cigarettes and told me they meant it only as a joke. And that I shouldn’t be out alone after dark.

When I thought this meeting couldn’t get more bizarre, in came a high ranking officer and three others. They sat on the other side of the room, the officer behind a small table and the others on the bench that extended down from where I sat with my crew. The officer began questioning one of the young men, loud enough for our group to stop what we were doing to listen. I couldn’t understand what they were saying, but a young man began crying, saying over and over he had been drunk and didn’t remember anything. Rashid translated the rest for me. The young man was accused of beating another man to death with repeated blows to the head with a rock.

Worth the Sacrifice: Years after COS,Amy and her family are still helping  young Kyrgyz adults become important and productive citizens of Kyrgyzstan and the world

It all started with a promise. A promise to Rahat’s mother that I would somehow find a way to get him to the United States to study. I was apprehensive about that promise, not sure how I was going to keep my end of the deal, but when I got back home after 2 ½ years in Kyrgyzstan, I had to try. I asked my family for help getting him to the US and they were all very supportive. During the process of enrolling him at my old alma mater, I was given not one, but two slots for exchange students and thus, Alina ended up in the US, too, for the 2001-2002 school year.

In February 2002, I decided to go to Kyrgyzstan for a visit. It was wonderful and everything was pretty much as I remembered it. I had taken my video camera and when I got back, my family actually wanted to watch all 18 hours or so of video. There, they saw my kids for the first time. My mother fell in love with one in particular, Lena. She became determined to get Lena in school as, at the time, she was still in the village helping her grandparents milk cows, though her heart was absolutely set on studying at American University of Kyrgyzstan. My mother raised the money for her tuition within 12 hours of sending a group mail to all her friends.

One thing led to another and we couldn’t help Lena if we weren’t helping this one and that one. Now, we are helping 11 of my former students from the village in varying degrees. Mostly we are helping them to get through school, but we have also been helping some of the women in my village by ordering Kyrgyz handicrafts from them and selling them to people in the US. ½ of the profits go to helping the kids with tuition and the other half goes to the women. We have also set up a mini-Heifer Project and have given 8 cows to needy families in my village. 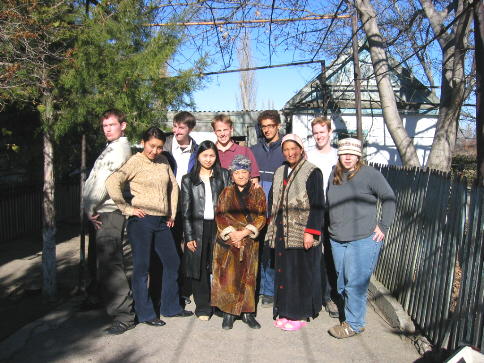 Get ready for Peace Corps at 50!